Invasive plants and animals are a very significant source of environmental deterioration, especially in ecosystems like Hawai’i. Invasive species are organisms introduced to Hawai’i that harm, threaten, and out-compete native species for resources and habitat. Plants can be invasive through aggressive growth that shades out native plants and dominating the seed back through higher dispersal than native plants. Some invasive plants actually inject toxins into the ground that kill the surrounding plants. Invasive animals can be invasive by direct predation or destroying habitat.

For instance, one invasive plant, miconia, becomes monotypic (the only plant present) in an area because it grows above and overshadows its fellow foliage. Due to the shallow roots of miconia, there is a greater chance that the entire hillside will erode away in heavy rain. One of the most devastating invasive animals introduced to Hawai’i is the pua’a or wild pig. They uproot native plants, leaving a wallow where mosquitos can breed. Mosquitoes carry a disease called avian malaria that often kills native birds. In addition to the spread of disease, forested areas that have been uprooted by the pigs will flow into the streams and ocean to act like a thick cloud smothering the reef and preventing sunlight penetration.

A list of some of the invasive species found on each island can be seen below.

Invasive Species Throughout the State 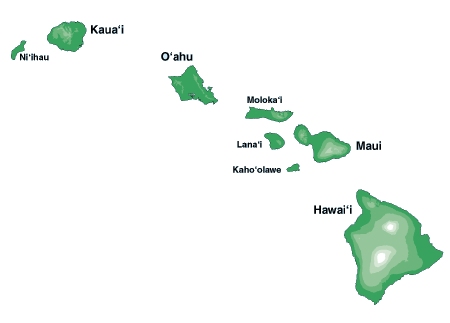